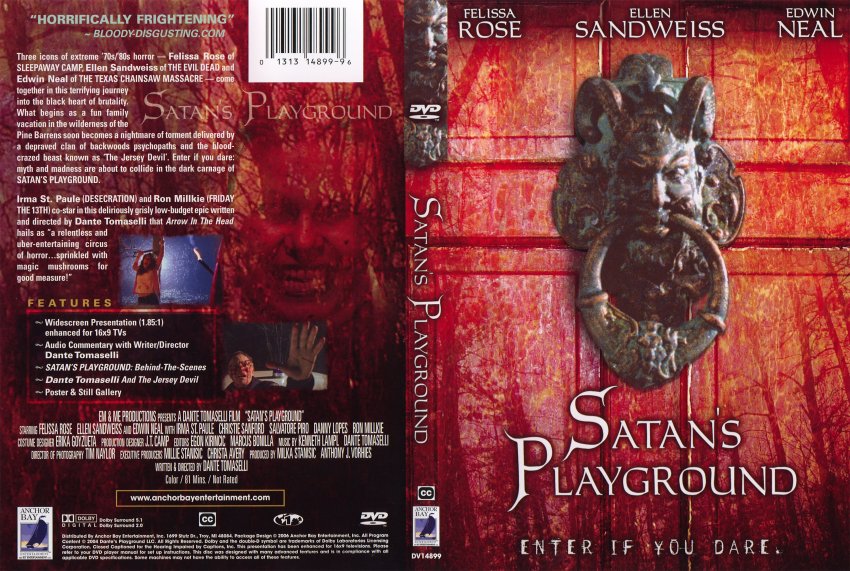 The complete Bruno family (the head of the family Frank, his wife Donna and their adult daughter Paula and their children, the mentally ill Sean and the boy Anthony) travels through New Jersey in a private car for an obscure purpose. And their journey winds along such desolate and unfriendly roads, wandering among the pine forests, that the mere sight of them is enough to send shivers down the spine of the viewer's nerves. The depressing scenery, the abandoned roadside store, the door wide open and slamming in the wind, the scratched walls and the total absence of people (neither cars nor pedestrians) hint unambiguously: the heroes are obviously superfluous in this unfriendly land. In addition, over the road constantly flies a creature, revealing itself only by the sound of flapping wings, and apparently the next car ... But the heroes continue their way and in the evening contrive to turn to some very deaf and broken country road (why.) Where their car, as one would expect, tightly bogged in mud. Without making much attempt to get the car out of the mud, for example, by putting something under the wheels, Frank goes to get help, for he says he saw a house somewhere nearby.

How many times have told: in houses that stand alone in the middle of the woods or fields, it is better not to look for a phone, tech help and generally go there obviously should not ... But in vain ... The only question is, with what the heroes will face: with wild psychopaths or with some undead. This time to welcome guests in the house will be another family abnormal - the old fortune teller Mrs. Leeds, her retarded daughter and not less retarded son, who do not mind to scald the hands of strangers blood. In addition, the neighborhood homes adored by an idiotic family, has long been a gathering place for the local satanists, holding under the cover of night their rituals ... Let us not forget about the mysterious creature, which is constantly hovering over the woods ... Will the Bruno family to survive in this nightmare.

I note that the movie "Satan's Playground" is interesting not so much in itself, but in the context of the creative aspirations of the director, who directed this film. So, meet Dante Tomaselli. A director, screenwriter and composer of Italian-American descent, he is the cousin of Alfred Sole, the man who brought Alice, Sweet Alice to the world in 1976. Tomaselli has not reached the heights of Hollywood, viewers do not carry him in their arms, as evidenced by the extremely low scores of his films on imdb.com, but the man persists in pushing his own concept of making horror films, which causes genuine interest in his work. Let's start, perhaps, by talking about the strengths of the picture. First of all, it's the stunningly crafted atmosphere. Impeccable locations in the form of stunted forest covered by a mist, precisely adjusted camera angles, color design of the frame, soft emphasis on the viewer's attention on the bright little things, like a giant tree trunk with dozens of gaunt and withered branches spreading out. Tomasseli perfectly knows how to use the possibilities of cinematography as a synthetic art capable of absorbing the achievements of painting, music and theater. The murky colors in the frame are so bold, the fog so dense that it seems as if you can touch it with your hands. This is also true of the soundtrack, which paradoxically combines primitiveness and melody. The melodies written by Tomaselli for 'Satan's Playground' are simple and unpretentious, but they are striking in their naturalness, there is no falsehood in them; a strange illusion is created that the film does not feature music composed by the composer, but music composed by the scary forest itself, the heartbeat of a man fleeing from an unknown flying creature. Perhaps all of this is made possible only by the fact that the writer, composer, and director here are one man. What Tomaselli 'saw' while working on the script, he was able to stage while in the director's chair and to frame with appropriate music, acting as a composer. In this way, the problem of adequate understanding of the same idea by people of different professions was removed. In 'Satan's Playground' the idea was 'promoted' on different levels by one person, which allowed it to be expressed with maximum completeness.

Another amusing detail of Tomaselli's creative path is his obsessive desire to work with actors who have appeared in classic horror films. Thus, in 'Satan's Playground' we get to see Ellen Sandways ('Evil Dead'), Felicia Rose ('Sleepaway Camp'), Edwin Neal ('Texas Chainsaw Massacre' (1974)), Ron Milke ('Friday The 13th'). I can't say that this is always a good thing, as Donna, played by Felicia Rose, looks not like Frank's wife but like his daughter (!) It's also clear that the picture is full of a lot of curtsies (Americans call them 'homage') to Hooper's The Texas Chainsaw Massacre and Raimi's The Evil Dead. Alas, Tomaselli has no sense of proportion with these either, which is why the endless camera flights through the woods a la Evil Dead towards the end of the film are, frankly, tiresome. By the way, the director admitted that he would have dreamed of luring Jamie Lee Curtis onto the set, but with the 'success' of his work, it's unlikely that Tomaselli will ever get this Hollywood star. So he has to pull lesser actors like Ellen Sandweiss out of movie oblivion: 'Satan's Playground' was her first (!!!) job since 'The Evil Dead' back in 1981.

Tomaselli is also literate when it comes to special effects. Computer graphics are good if you've got a hundred million dollars budget on your hands, like in 'Lord of the Rings'. On the other hand, it still looks too cartoonish. And when I want to watch a cartoon, I sit down and watch it," says Tomaselli. And so the director will explain to the viewer what kind of creature is circling over the woods, but never show it. There will be murders in progress, a shadow of the creature and nothing more. You can't argue with such arguments, because how many times we had to watch the impression of powerful in terms of suspense productions was blurred by obscene computer graphics. The only thing unapologetic about Tomaselli is that the killings in 'Satan's Playground' look extremely cheesy. Rejecting the computer graphics experts, he somehow ignored the work of the gore-effects directors as well. Only one bloody scene in the film was worthy - the moment when one of the teenage tourists' throat is cut by the creature with a claw ... That's it. The house murders, made by the principle "with a mallet on the head" (without laughing - a wooden mallet is the favorite weapon of the mad family) is hilarious, badly staged and just reminiscent of the notorious grotesque cartoons ("Tom and Jerry", etc.), where cartoon characters ram one another with huge sledgehammers, etc., etc. The only difference is that in the cartoons everything happens without any harm to life, while in 'Satan's Playground' it is just the opposite. 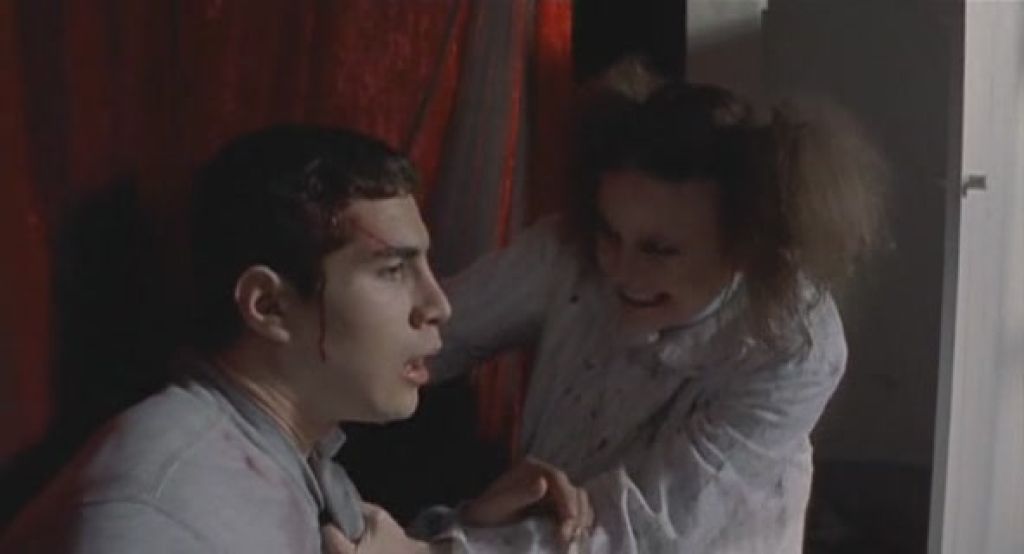 So, we have smoothly passed to the analysis of the film's shortcomings... The main of them is the absence of any sane plot. The center of the narrative is the house, where the characters (not just Bruno's family members) will go one by one and almost all with the same dumb question: 'Excuse me, do you have a phone.' Closer to the finale, this cretinous question, uttered about a dozen times, becomes a real abuse of the viewer's mental activity. Also, looking back at his earlier films ('Horror', 2002; 'Desecration', 1999) we can talk about the director's obsession with the occult-satanic and drug-related themes, which, frankly, in 'Satan's Playground' are neither here nor there. It is absolutely unclear what is the semantic meaning of the shots with Satanists performing the ritual in front of the old house. Why are we shown the old fortuneteller snorting cocaine? One gets the impression that this is a show for show's sake, whether it is an end in itself or a way to stretch out the screen time (all Tomaselli's films, by the way, are quite short). If you take into account that the plot is largely based on friendly curtsy and is inspired by the earlier film 'The Thirteenth Baby', there is absolutely nothing original in terms of content. Add to that a slight touch of silliness, which appears in a scene, say, when a police officer enters an extremely suspicious house with a gun, but after a couple of minutes he holsters his revolver (!) in order to help up a fallen girl. Alas, the cute 80's recklessness obviously won't inspire today's viewer who expects to see more or less realistic action on the screen.
What do we have as a result. A film with terrific atmosphere, magnificent visuals, but with an absolutely insane plot. In terms of plot, 'Satan's Playground', by the way, reminds of 'Hillside Cannibals', where the characters were also crowding around the cannibal dwelling, running back and forth pointlessly... Tomaselli's Homage is busy, but obviously excessive. The grotesque family of assholes in the house spoils the impression too much... In a word, Tomaselli is not a hopeless cinematographer, but only as a visual specialist... but he could have used a talented scriptwriter. Expect a beautiful, atmospheric, but wildly pointless and dumb movie before watching 'Satan's Playground'...